On the week of 4th to 8th November, the congress which marked the 50th anniversary of the Social Justice and Ecology Secretariat (SJES) took place at the General Curia in Rome. This year, the SJES, founded in 1969 at the instigation of Fr. Pedro Arrupe, commemorates fifty years of dedication to the mission of promoting social justice and reconciliation.

The fiftieth anniversary is a kairós, a historic opportunity for the Society of Jesus to renew its commitment to the mission of a faith that does justice and seeks reconciliation. Moreover, it is a chance to reinvigorate its social and ecological dimension. This international congress will be attended by more than 210 people, including Jesuits, experts and activists from all continents, dedicated to what Pope Francis regards the “peripheries” of the world. 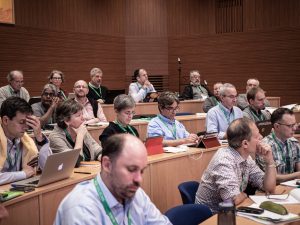 The challenges facing the world today are more complex than those 50 years ago. We are witnessing a change of era in humanity, already envisaged by the Second Vatican Council.  For this reason, the meeting has three objectives: (1) to celebrate God’s faithfulness on this journey, (2) to discern the roadmap for implementing the Universal Apostolic Preferences (PAU) – the guidelines which will govern the Society of Jesus for the next ten years – in the social sector, and (3) to create opportunities for collaboration and networking with others.

It is an opportunity to reflect on the history of the SJES: its achievements, its milestones, and lessons learned. It is also a chance to work on how the SJES can best contribute to a greater respect for the human rights and fundamental freedoms of the people around the world with whom it works: from the struggle against environmental exploitation in Honduras to the rehabilitation of youth gang members in the United States; from the dalits(“untouchables”) and indigenous peoples displaced from their land in India to the educational challenges of young people in Africa; from working with migrants and refugees who come to Europe to fighting against climate change.

The first day began with a prayer led by the Latin American and Caribbean Jesuit Conference (CPAL) which reiterated the prophetic words of Arrupe: “commitment to justice taken to heart will come at a cost”… the inaugural session was held in the Main Hall of the General Curia in the presence of the Superior General of the Society of Jesus, Fr. Arturo Sosa SJ, Cardinal Peter Turkson, Prefect of the Dicastery for Promoting Integral Human Development, Cardinal Michael Czerny SJ, Under-Secretary of the Migrants and Refugees Section of the Vatican, Cardinal Pedro Barreto S. J, Archbishop of Huancayo and Vice President of the Peruvian Episcopal Conference (CEP), and Fr. Xavier Jeyaraj SJ, Secretary for Social Justice and Ecology. 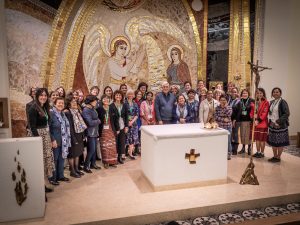 In his speech, the Father General gave a brief overview of the milestones that mark the 50th anniversary, and invited those present to bring to these sessions the faces of the people they serve, the faces of the martyrs of the cause of justice. He urged them to be grateful for what they have experienced, but above all, to be ready to follow Jesus and his people on the frontiers: “Thus, let us take advantage of this very special moment, as God is once again speaking to us and calling on us to reflect, to give thanks, to discern and take bold, daring and risky decisions in order to follow Jesus and his people in the realities of the frontier, together with the poorest, the most excluded, and the most vulnerable”.

In his speech, Xavier Jeyaraj, Secretary of the SJES, outlined the recent history of the Secretariat and referred to Arrupe’s founding inspiration. Then, Cardinal Peter K.A. Turkson addressed the treatment of justice that is born of faith in the Social Doctrine of the Church and challenged those present with the notion that it is our behaviour towards the little people in our society that defines us.

The first session ended with a statement from Cardinal Michael Czerny SJ, who called for a triple conversion as a church: Cultural, Ecological and Synodal. After the break, the Spanish Jesuit Patxi Alvarez, former Secretary of the SJES, presented a historical overview of the social apostolate of the Society. He discussed the origin of the Worker Mission: priests sent to be poor amongst the poor, living amongst the workers themselves and sharing their demands. He also explored the legacy of Pedro Arrupe and the key points of the General Congregations. He ended his speech by inviting those present to think about creative ways to provide global answers to global challenges.

The morning ended with two overwhelming testimonies of the commitment to justice that is born of faith. Jenny Cafiso shared the story of her life as a nurse, serving the poor in different contexts, and how she finds God in the midst of pain and suffering. Ismael Moreno SJ (Father Mello), left the attendees on the edge of their seats after recounting the persecution suffered by justice advocates in Honduras, and speaking of how his hope stems from his faith in the “Lord of the Dawn”, whom he finds in the hospitality of communities and the resilience of the poor with whom he surrounds himself. 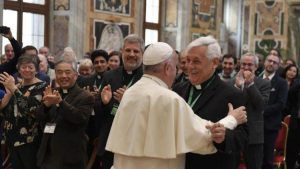 The day ended with spiritual conversation groups in the afternoon and a Eucharist in memory of Fr. Pedro Arrupe and the 57 Jesuit “martyrs” who have given their lives for the cause of faith and justice in different parts of the world over the last 50 years.

In the days that followed, the group of attendees were able to learn more about some of the territorial areas and the fields of social work of different Jesuit entities throughout the world. On the morning of Thursday 7th November, Pope Francis welcomed the attendees in a private audience at the Apostolic Palace of the Vatican, encouraging them to continue their work with the people who have been excluded from society, to be “at the service of the most crucified of our time”. In addition, he asserted the role of Father Arrupe: “He always believed that the service of faith and the promotion of justice were radically united”.

Click here to access a document with the main highlights of the event. You can also visit the SJES website and see the photo gallery from all five days of the conference.

This English translation has been possible thanks to the PerMondo project: Free translation of website and documents for non-profit organisations. A project managed by Mondo Agit. Translator: Myles Henehan.