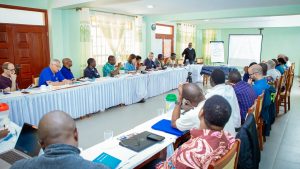 The International Conference on Migration and Refugees was held in Nairobi from 20 to 22 January. This conference has been organised by the Jesuit Justice and Ecology Network (JENA) and has brought together social centres, the Jesuit Refugee Service, universities, the Lead Magis youth network, Church institutions and European collaborators from the mission. Some of our institutions were among these European collaborators, such as Entreculturas, Alboan, SJM Spain, the University Institute for Migration Studies (UPComillas) and the DDM in Nador.

During the first half of the conference, speakers took to the podium to highlight the major political, social and economic challenges facing vulnerable migrants in different regions of Africa. The following sessions included a mapping exercise for participants, followed by group discussions that allowed them to participate within a collaborative space. The conference identified six areas of collaboration and defined a simple network structure to monitor its results.

“In serving vulnerable migrants we recognise that networking is the best way to organise ourselves,” said Father Charles Chilufya SJ, Director of the Jesuit Justice and Ecology Network (JENA).

This was the final document agreed at this International Conference.

“We, Jesuits and partners in Africa, inspired by the Universal Apostolic Preferences of the Society of Jesus and the call of Pope Francis, commit ourselves to welcome, protect, promote and integrate vulnerable migrants.

Our call to serve vulnerable migrants includes those forcibly displaced – internally displaced, refugees, asylum seekers and stateless persons – survivors of human trafficking, people in transit and those who have been forcibly repatriated.

By serving vulnerable migrants collaboratively, we will pay special attention to those who suffer discrimination due to their gender, age or disability.”

About the Jesuit Justice and Ecology Network (JENA)

The Jesuit Justice and Ecology Network (JENA) is a diverse community of faith-based Jesuit NGOs, also known as Social Centres, nearby Jesuit Institutions, Jesuit peace and development activists, and academics moved by the vision of a just, peaceful, poverty-free, and ecologically sustainable Africa. JENA works under the protection of the Office of Justice and Ecology of the Jesuit Conference of Africa and Madagascar (JCAM).

-This English translation has been possible thanks to the PerMondo project: Free translation of website and documents for non-profit organisations. A project managed by Mondo Agit. Translator: Sophia Georgiou.