Hundreds of people have come together to hike for a society that is more welcoming and inclusive for immigrants and refugees in a new edition of #CaminosDeHospitalidad (Hikes for Kindness). They have walked tens of kilometres in over 10 cities in these marches of support inspired by the Social Sector of the Company of Jesus in Spain, showing the community’s drive to create an environment full of protection, freedom, dignity and equality for immigrants and refugees. Inspired by the work of Father Frans van der Lugt on coexistence in diversity and focusing around the campaign #ThePowerofVote and World Refugee Day, which takes place on the 20th of June, thousands of people have demanded politics that guarantee human rights for immigrants and refugees, and that prevent pain, suffering and death in many places where people are trying to escape from violence, misery or harmful climates.

Throughout the month of May, in acts of movement and awareness prior to the European elections on Sunday 26th, and as a part of the #ThePowerofVote effort of JRS Europe, numerous hikes and activities in places like Valencia, Madrid, The Basque Country (Loyola), Cordoba and Seville were organised. In addition, last 22nd May we delivered a dossier to European Parliament representatives containing our political and social view points at #CaminosdeHospitalidad (Hikes for Kindness).. Here are some of the places we have been hiking throughout the month of June: 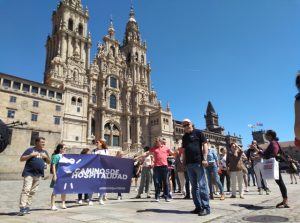 In Galicia, thanks to the combined effort of Entreculturas’ three branches in the region, last Saturday 1st June hundreds of people took part in a city walk through the streets of Santiago de Compostela. Volunteers, employees, specialists and sympathisers came together in the Galician capital to celebrate a time of political movement and change in the rights of refugees.

The aim of this walk was to stop in the “no power areas” of the city, but it also had a deep link to the humane movement, solidarity and support. The first stop was in the entrance of O Toural Square, where homeless people usually sleep. The second was in Cáritas Centre in Vieiro, a place of refuge for people who need a space to clean themselves, chat and share a meal. The last stop was in Vagalume, Oblatas de Santiago’s project, which offers help and protection for women who have fallen victim to abuse and sexual exploitation, this is a place where they find company, help, respect and dignity.

The second March for Hospitality returned to Serra Grossa in Alicante last Friday 14th June. Hundreds of people heard the cry for help and joined the various organisations and social groups that began the initiative #SomosRefugio (#WeAreRefuge), amongst those which could be found there were the intra-church network #MigrantesconDerechos (#migrantswithrights), Entreculturas and CEAR. Starting from Inmaculada Jesuitas School, they hiked the kilometres ascending the serra and took part in a series of symbolic acts towards the end with the Mediterranean Sea as a backdrop, which is sadly becoming a place of death and suffering. 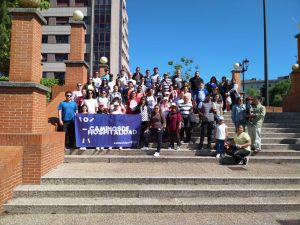 The campaign Kindness´comission in Asturias´ PAL, which brings together social organisations, such as the Homing Foundation of San José or the Entrecultura´s Asturian branches; Pastoral Centres; and Educational Centres, such as Inmaculada School in Gijón or San Ignacio de Oviedo; as well as other people and organisations, organised a hike for kindness last Sunday 16th June. The starting point was Invierno Park in Asturias’ capital, hundreds of people hiked over 10 kilometres throughout the Priorio area, in Las Caldas.

Once the hike had finished, which demanded a more secure and inclusive society, a mass took place in the church of Priorio and a meal was shared by all participants. There were also games for the younger children, speeches, breaks and walks.

In Valladolid, in honour of World Refugee Day, last Wednesday 19th June, hundreds of people participated in the activity #CaminosdeHospitalidad (Hikes for Kindness), the starting point being in the central Plaza Mayor (The Main Square) of the Pucelana capital. The hike was similar to that of 2018, the participants hiked from Camino Viejo de Simancas and finished in INEA School on the outskirts of the city.

Thanks to PAL Social of Valladolid (Red Íncola Foundation, Entreculturas Valladolid and INEA Foundation), who organised the day, many of the people joined together to walk in solidarity with immigrants and refugees, CVX Volunteers, employees, friends and colleagues, batucada social… Once in INEA, they shared many experiences; a speech on the manifesto of beliefs and hopes; a meditative dance, and an olive tree was planted in the gardens, there was also food and snacks for everyone involved. 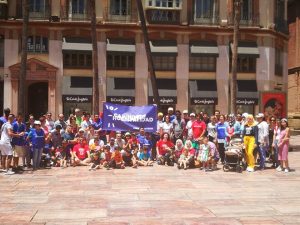 On Saturday 22nd June, various Malagan social organisations, of which Entreculturas Malaga and Kindness could be found, came together to organise a hike for kindness, safety and inclusion of immigrants and refugees in the Solidarity Movement with Malagan Immigrants, together with the Local Coordinator of NGOD. Starting from the Roman Theatre, the city hike went to important points in the city, finishing with a reading of the manifesto in Plaza Constitucion (Constitution Square) and a shared meal in Arrupe Malaga Centre.

Hundreds of people heeded to the call of the hike, they read testimonies in first person and they fought for secure and protective politics, more respect of human rights, in addition to demanding that a stop be put to the loss of lives in the Mediterranean Sea. 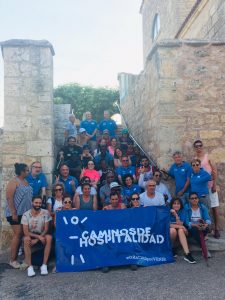 Last Wednesday 26th June the Jesuit Burgalese social organisations, lead by Entreculturas Burgos and Atalaya Intercultural, together with the organisations Burgos Acoge and The Red Cross, started a new edition of #CaminosdeHospitalidad (Hikes for Kindness), transforming the Camino de Santiago into a solidarity walk and a melting pot of cultures.

Starting from Burgos, the participants walked 13 kilometres distance to Rabe de Calzadas, where they celebrated reaching the finish line with some shared snacks and a speech made by François Xavier Nsababandi, director of JRS Burundi, who presented Entrecultura’s campaign “Escuelas Refugio” (Refuge Schools) and recounted the work done by the organisation with the refugee population in African countries and the opportunities that education and formation offer in terms of protection when facing violent environments.