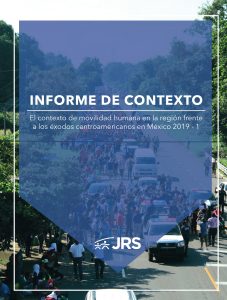 The Jesuit Refugee Service of Latin America and the Caribbean (JRS LAC) has published a report on the context of human mobility in Mexico in the face of the exodus from Central America.

The countries of northern Central America are suffering a profound, complex and historical crisis. Violence is on the rise in El Salvador, Honduras and Guatemala as a result of constant confrontation between gangs, organized crime groups, drug cartels and international mafias. Organized crime has broken through because of the lack of institutions in the region’s states, where impunity and corruption reign, and democratic institutions remain fragile. This violence leads to homicides, disappearances, recruitment of children and adolescents, sexual violence and forced displacement. All of the above has fostered a movement of people who seek to leave behind the structural violence experienced in Central America. The so-called “Migrant Caravan” that left Honduras in October 2018, which was later joined by people from Guatemala and El Salvador, is proof of this.

For his part, and as he promised in his campaign, Donald Trump has implemented a severe migration policy against migrants and people in need of international protection, based on persecution, border control and reinforcement. The president of the United States has tightened the immigration and refugee system, increased mass deportations and generated great economic pressure on Mexico and the countries of northern Central America to prevent people from coming to the United States. These policies have focused international attention on the migratory dynamics of Central America, Mexico and the United States, as it directly leads to the prolongation of conflict in the region. Meanwhile, the actors of transnational crime create a lucrative business out of the need to migrate, exposing migrants to situations of greater vulnerability.

This English translation has been possible thanks to the PerMondo project: Free translation of website and documents for non-profit organisations. A project managed by Mondo Agit. Translator: Josie Hough.