In honour of International Migrants Day, the non-governmental organisation, Entrecuturas, turned the spotlight to Central American migrants, with a concrete focus on Mexico by launching a report called “New faces, the same dynamics. Migratory processes in Mexico.” The report contains data provided by the Documentation Network of the Migrant Defence Organizations (REDODEM). REDODEM is composed of 23 shelters, homes residences, canteens and organisations throughout 13 states in the Republic of Mexico. The Jesuit Migrant Service-Mexico (SJM) took part in a press conference and discussed the similarities that exist between migration flows in Mexico and the border in the South of Spain where similar work is carried out regarding migrants in Melilla, North Africa. Juanita Bagés, professor at the Complutense University of Madrid, has worked closely with students to raise awareness by holding exhibitions called “Miradas que migran” (Looks which Migrate). 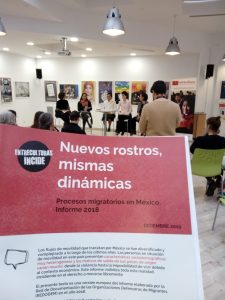 Elisabeth Figueroa Ruiz, Technical Secretary at REDODEM, has presented the main figures in the report to shed light on the diversity of people and the mobility flows that come together within the areas of the network.

More than 36,000 people have registered to REDODEM, the majority being male and registered in the South of Mexico. The majority age group are people of working age and are unable to maintain economic activity in their countries of origin due to conditions of insecurity, and leaving them with no choice but to exile. Pregnant women, and the 3,881 children and young people are the most vulnerable when in transit and represent 10.7% of those registered with REDODEM. It is also worth highlighting that 57.7% of young people travelled alone. Also, it has been emphasised that girls and young women are a lot more vulnerable than men when transiting.

As well as giving background of the situation, Elisabeth explained that the objective of REDODEM is to record and document the situation of people in transit and also crimes and human rights violations committed against them in order to base advocacy action from a human rights perspective.

The difficult situation faced by migrants stems from the migratory policy implemented in Mexico during the six-year Peña Nieto period. This period showed a lack of institutional interest to meet the needs of people in transit from a human rights point of view. Even though Mexico promoted the Global Compact on Migration at international level, national policies continued being dominated by a security perspective and portraying migrants as dangerous and criminals.

Hermana Magdalena Silva Rentería, Coordinator at REDODEM and founder of CAFEMIN (a group of progressive Catholic nuns with help from the United Nation’s refugee agency, the UNHCR) highlighted in her statement the role and impact that the media on the image of migrants. The media shows xenophobic campaigns which convey migrants as criminals, advocates of human rights and and show refugee sites. She stated that in 2019, there were 9 cases of forced entry by Mexican Police in these shelters and violating the human rights of migrants.

Hermana Magdalena has also exemplified that the situation in southern border consists of inhumane masses of overcrowding and the government trying to stop migration flows. With regard to the US border, she states that there is also a problem of overcrowding and migrants are deported back to their countries after unsuccessful appointments to seek refuge.

Migration flows in Mexico is a complex reality and it is very complicated distinguish the reasons for leaving. For example, people leave due to economic reasons, living conditions, institutional deadlock, climate change and widespread violence. Migration has become the only solution worth living for.

When addressing this topic of migration, it is important to recognise those who are migrating under an international protection scheme which supports other types of vulnerabilities which adds to their situation. Of the 36,190 people registered to REDODEM in 2018, at least 4,244 were refugees. These are the people who clearly demonstrated having left their countries of origin for reasons of different forms of violence.

The need to flee, the feeling of danger, the lack of human rights and difficult access to international protection are issues also faced by migrants who arrive at the Southern border of Spain. The Jesuit Migrant Service works towards accompanying, serving and defending migrants and refugees who are emigrating from Melilla. 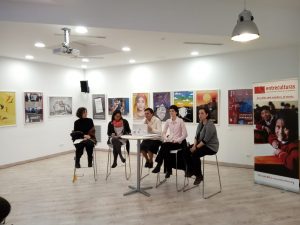 Maria Vierya, lawyer for the Jesuit Migrant Service, has been witness to the wide variety of migrants that the SJM look after. For instance, women who have been potentially victim to sexual exploitation, girls who were under the custody of the government and underage and unsupervised applicants seeking international protection. Furthermore, a Maritime Rescue located a small boat of migrants who arrived at the Chafarinas Islands after crossing the Mediterranean. There are international protection applicants who jumped over a barbed-wire fence located in the border of Spanish territory. Furthermore, the SJM also attends to families where children have been separated from their parents.

Also, there is a lack of free movement in Spain for those seeking international protection and there are not enough public policies to help improve human protection. Those mourning the loss of loved ones is also a cause for concern as well as these people are left in limbo.

In her statement, Maria stresses that if migration policies are based on externalising border controls and if the focus is put onto migration flow, this will result in an increase of violence, people’s lives being put at risk and not guaranteeing basic human rights.

Despite the severity of the situations, the rise in hate speeches against migrants and refugees is increasing at a worrying rate. From the perspective of Global Citizenship Education introduced by UNESCO, Entreculturas is setting up a programme called “Miradas que Migran,” which aims to change the way in which migrants are viewed. In this context, learning projects are being carried out in cooperation with the Faculty of Arts at the Complutense University of Madrid. As vice-dean of Mobility and coordinator of the “Miradas que Migran” project, Juanita Bagés has explained to us, the objective of this project is to get students thinking about migrants being forced to move around the world and how these students can welcome migrants into their countries. In the fourth addition of the programme, more than 600 students have contributed to welcoming migrants into their culture. Also, these students have changed the opinions of other university students with regard to forced migration.

Entreculturas wants to contribute by raising awareness, having a political and educational impact to build intercultural societies based on human rights in which migration is seen as an opportunity and not as a threat.

– (Nuevos rostros, mismas dinámicas) This English translation has been possible thanks to the PerMondo project: Free translation of website and documents for non-profit organisations. A project managed by Mondo Agit. Translator: Rebecca Donald.