Last weekend, several entities of the Jesuit Migrant Service (SJM) organised and participated in the now traditional prayer vigils, to denounce the existence of Migrant Detention Centres (CIE – Centros de Internamiento de Extranjeros) and to raise awareness of the migrants who are being unjustly held in these centres. The vigils were held in Seville, Madrid and Barcelona, and the Claver Association, Pueblos Unidos and the Migra Studium Foundation all participated. 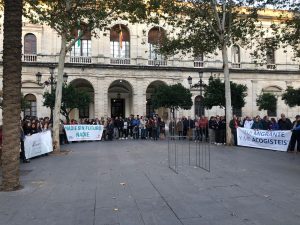 On Friday 17th January, at 6 p.m. in Plaza Nueva, Seville, some 70 people took part in a Circle of Silence in homage to the migrants held in the CIE, with the slogan, “Why these walls? Let us restore hope”. Organised by Seville’s Diocesan Delegation of Migration and Claver Association-SJM, numerous church organisations who work with migrants took part in the event. People read testimonies of internment and of the suffering experienced by those faced with the injustice of the CIEs.

In Madrid, the Prayer Vigil took place on Saturday 18th at midday, organised by the Pueblos Unidos Centre of the San Juan del Castillo Foundation, with the support of organisations which belong to the #MigrantsWithRights network and the Hospitality Board of the Archdiocese of Madrid. Around 140 people met in Plaza del Metro de Aluche in Madrid, close to the CIE. Some of the migrants who had previously been detained in the CIE participated in the event, accompanied by Pueblos Unidos, as well as some social church organisations who work with the collective. 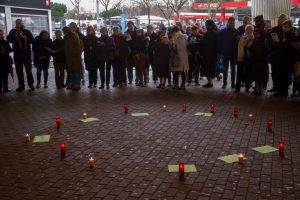 After the opening of the event, under the slogan of “More Hospitality, Less Hostility” and led by the director of Pueblos Unidos, reflections were made by Iván Lendrino, Jose L. Segovia, vicar of Social Pastoral and Innovation of Madrid and priest of the CIE, Javier Baeza, parish priest of San Carlos Borromeo in Vallecas, Madrid, and José Luis Pinilla, secretary of the Bishops’ Migration Commission. Acts of reflection and prayer, candle-lit tributes to the detained migrants, and music closed the day of solidarity.

Lastly, on Saturday 18th at 6 p.m., the Migra Studium Foundation met with more than 250 people at the door of the Zona Franca de Barcelona CIE to celebrate their traditional interreligious vigil with the slogan “You are not alone. Stop Hostility”. 45 diverse organisations joined the vigil, including Cristianisme I Justicia, Cáritas, various diocesan delegations, SOS Racisme, Pere Tarrés Foundation, Consell Islámic de Catalunya and Acció Católica Obrera. 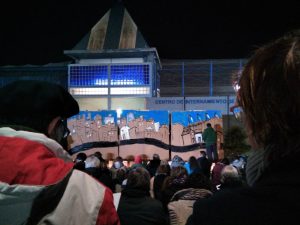 During the event, participants read sacred readings from Christianity, Islam and Judaism, inviting people to reject hostility against migrants, as well as testimonies from people who have hosted migrants in their homes, promoting and practicing hospitality. While four musicians accompanied the prayers, the artist Ignasi Flores translated the unanimous cry of those attending the event and of civil society onto a 6×2 mural painted on the door of the CIE: We Want Hospitality. Real testimonies of people detained after more than 20 years living in Barcelona, stories of suffering, of incredulity, of uncertainty and injustice, and of violated rights were read out and reflected upon. As the event came to a close, the names of the 11 people who have died since the opening of the CIEs were read out by Pau Vidal, SJ, in charge of the CIE project in Migra Studium; Carmen Juares, anti-racist activist and feminist founder of the Association of Migrant Women; and Buha Mahfud, jurist of Iridia Centre for the Defence of Human and Civil Rights.

Three vigils in three cities with one single aim: the closure of the CIEs. “Neither silence nor indifference. We want Hospitality. Stop Hostility against migrants”.

This English translation has been possible thanks to the PerMondo project: Free translation of website and documents for non-profit organisations. A project managed by Mondo Agit. Translator: Sophie Batchelor.