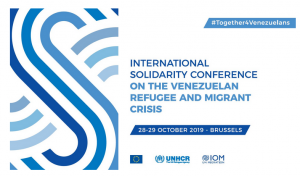 Entreculturas participated, on October 28th and 29th, in the first International Solidarity Conference on Venezuelan Migration and the countries hosting them, convened by the European Union, the United Nations High Commissioner for Refugees (UNHCR) and the International Organization for Migration (IOM) and held in Brussels.

The international community was represented at the Conference by the attendance of 500 people on behalf of Latin American governments, several member states of the European Union, the United States and other donor countries, the European Parliament, the development bodies and other international financial institutions, United Nations agencies, foundations and NGOs, the Church and businesses, among others. Its objective was to make visible the seriousness of the situation and to clearly explain what is happening and why the need is urgent for international aid to be increased.

Venezuela’s crisis has led to the largest displacement of people in Latin America in recent history and its migration figures represent the world’s second immigration crisis. 4.5 million Venezuelans have left the country in recent years, but the figure is estimated to increase to 6.5 million by the end of 2020. The numbers of migrants and refugees keep growing and those leaving the country do so under increasingly precarious circumstances. 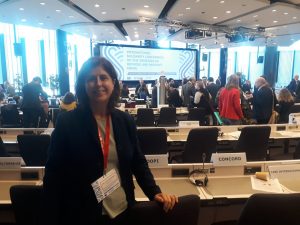 82% of Venezuelan migrants and refugees are staying in neighboring countries in the region, which are themselves countries with fragile economies and recipients of international aid. All these countries mentioned the urgent need to have the means to school thousands of children, the need to bring young people into national technical training systems, or the difficulties in accelerating the validation of degrees and licenses. Alongside humanitarian care, all Latin American countries have their sights set on integration and count on the Venezuelan immigrant population to stay.

Entreculturas was invited to the Conference because of the humanitarian work we are developing in the region in partnership with the Servicio Jesuita a Refugiados (JRS) (Jesuit Refugee Service) and Fe y Alegría (Faith and Joy). Together with other NGOs, Entreculturas has provided for joint positioning on the most important aspects observed to improve the humanitarian response.

LEARN MORE ABOUT THE CONFERENCE

This English translation has been possible thanks to the PerMondo project: Free translation of website and documents for non-profit organisations. A project managed by Mondo Agit. Translator: Jordan Alder.