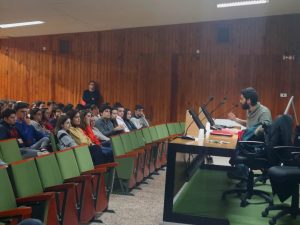 Colegio Inmaculada Jesuitas de Alicante (a school in Alicante, Spain) has organised a series of workshops to bring the work and spirit of La Campaña Hospitalidad (The Hospitality Campaign) to their student body, through the use of activities given as part of the photography exhibition, Somos Migrantes (We Are Migrants), which you can find showcased in the school’s church until the 22nd of January.

Both secondary school and sixth form students attended a workshop about the reality of migration and the people that are forced to flee to other countries, with the participation of Cecilia Villarroel, Coordinator of Entreculturas (literally “between cultures”) in Valencia (Spain); and Daniel Martinez, the Campaign Awareness Officer. The talks, where students were able to actively participate in a simple game followed by the opportunity to ask questions, concluded with the student body visiting the photography exhibition within the school’s church.

An opportunity for the student body to explore the reality of the life of migrant peoples, to become more closely aware of official migration figures – that will help to demystify some preconceived perceptions regarding migration – as well as breaking mental barriers that prevent us from welcoming foreign peoples. This activity has been made possible thanks to the efforts of the Alicante Entreculturas Delegation and their faculty.

This English translation has been possible thanks to the PerMondo project: Free translation of website and documents for non-profit organisations. A project managed by Mondo Agit. Translator: Freyja Bullen.